“Road Trip!” she shouted. “Let’s go to Woodstock! You can’t write a rock and roll blog without ever going to Woodstock! Not when we’re so close!” How could I ignore that level of energy and enthusiasm? She was right, I needed to go.  I had actually been thinking about Woodstock earlier in the weekend when John tagged me in a Facebook post with this gorgeously haunting video by Good Harvest:

So we were off, leaving from Hobart, the Book Village of the Catskills (where I was attending the Hobart Festival of Women Writers) and heading towards Woodstock…

I should mention my very enthusiastic traveling companion is my friend Linda, who appeared in my life first as a local writing icon, then became a writing instructor, and now she is my friend, mentor, and cheerleader.  Linda was the one who encouraged me to blog about my band wife experience and even came up with the name of the website!! She keeps me focused and accountable, all the while singing my praises to anyone who will listen!

As we got closer to Woodstock, she took a slight detour down Mink Hollow Road, where Todd Rundgren used to live and record.  When she was younger, she drove down this road, hoping to maybe catch a glimpse of Todd, this talented guy she was crushing on. We started feeling a bit stalkerish, driving down this narrow country road, wondering if at some point we would be found out, but then we came to the end of the road and it was actually a trail head, so we didn’t have to worry about some sheriff stopping us and asking who we were there to bother.

From down the road, Woodstock could be just any small town in upstate New York. As we drove  into town, something seemed different. Maybe it was that first parking lot that had a popup tie dye sale going on. Linda was especially excited because she had been in Woodstock a couple of other times, but the shops were dark and the streets empty. She was thrilled that she would be able to get inside some of the shops this time around.

There were a disproportionate number of antique and head shops in town. The very first one we came to had tie dye and banners on the outside, with statues of Jake and Elwood Blues (of Blues Brothers fame) sitting on chairs in the garden.

There was a bench out front with a sign that said’ “Try this on! Take a picture!” ‘This’ was a patchwork coat of many colors, pieced together with gorgeous fabrics that hippie sundresses were made of, and a top hat. Linda pleaded and cajoled until I got enough courage to put the hat on my head, trying not to think about all the heads, clean and otherwise, that it had been on before me. She then took a couple of glamor shots  (this is the shot I like the best!) I felt like a real flower child.

It was cool to check out all the memorabilia from the era when the original gathering happened all those years ago at Yasgar’s farm. Among the souvenier shops were antique shops with stuff from the 60’s and 70’s, items that people would pick up and take home so they can have a touchstone to their past. There was an abundance of lighters, bongs, incense, and other paraphernalia. We skimmed a few of those shops and lingered over the jewelry and trinkets. We got ourselves matching bangles (the Bangle Sisters, we decided to call ourselves, a nod to the Susan Sarandon and Goldie Hawn characters in the movie The Banger Sisters, another groupie movie.)

We then happened upon a cupcake shop. Peace, Love, and Cupcakes.  I made a comment about hipsters and cupcakes and how I could make a whole cake for the price of one of those treats, but then we saw that they were named the best cake in the country by the Food Network, so of course, we had to step in. In a very small storefront was a bake case with gorgeously frosted cupcakes. Most of them were named after famous musicians.

Kristina was really helpful and talked us through some of the most popular ones. Linda picked the Bob Dylan (carrot cake with cream cheese frosting), I tried the Joe Cocker (caramel) , and we picked the Jimi Hendrix for later (intense chocolate cake with triple shot mocha frosting). And let me tell you, despite all my complaining about spending too much money, this cupcake was incredible. Kristina is also a band manager and she had some tricks of the trade to share with this newbie.

One of the shops we walked by had some singing bowls in the window and Linda just had to stop by. I had never heard of them before, and Linda owns and plays them, so it gave me some insight into the musical talent of the woman who taught me to write about mine! The man there let us try some of them out and showed us how he teased music out of them (he told us that Buddhists strike the bowls, not circle around the rim.)

It was a little after 4, and the community drum circle had started. Every Sunday, people gather with drums and tambourines and all matter of percussion to drum away the afternoon. Didn’t bring any instruments? Don’t worry, they roll out a huge box full of maracas and tambourines and cymbals so everyone can join in. 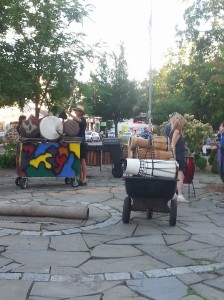 My new favorite percussion instrument, the cajon, was among the drums being played. These people drummed and drummed and then drummed some more. When one song ended, another beat would start right up and everyone continued. People drifted in and out of the square and danced and swayed and became one with the music. We decided to have an early dinner in the outdoor café which gave us a seat right next to all the action. I love how they do this every single week (weather permitting.)

As the sun started to set and we headed towards home, I was so grateful for Linda’s spontaneity.  I would never have stopped to smell the patchouli if it weren’t for her telling me to experience everything rock and roll. Now the band wives will be planning a visit next summer.  I can see Bridgette dancing to the beat already!

2 thoughts on “By The Time We Got To Woodstock”