Day Ja Voo. I have been following them for years, from fundraisers to dive bars to summer outdoor venues to my own living room. Watching them play and hearing the first few notes of a favorite song leads me to break into a smile and sing along. The love I have for the music and the guys (and their wives) is unparalleled. Let’s go back to the beginning of this journey to fandom. 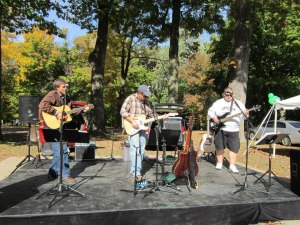 The first time I went to see this talented trio was when they were playing for a fundraising walk at Longbranch Park, raising money for children with cancer. I said a quick hello to Vinnie then found a tree to lean on, away from the action, to wait for them to perform.  The teams of walkers started to stream into the picnic area, groups of people wearing tshirts and carrying signs with pictures of kids who had some form of cancer.  As the groups continued to flood in, I realized that some of the kids were no longer living and for some reason, I was so overcome with emotion that I could barely make it to my car without sobbing.  I did not see the guys play that day.

The next opportunity came about 6 months later when I found out they were playing in some dive bar on the outskirts of town.  Driving through the hypnotic snow on an unfamiliar road, I set out for the Iona Corners Tavern. It was a tiny bar in a tiny town with a tiny parking lot that was hard to navigate with all the snowbanks. After finding a spot to park, I took a deep breath, screwed up my courage and stepped through the door onto the beersoaked floor. As my eyes adjusted to the dim barroom, I looked around for my friend.

There were a couple of people sitting at the bar, a pool table upended and leaning on one wall with chairs crowded all around it, and I saw two guys with musical instruments in the opposite corner. Neither one of them was my friend Vinnie.  Was I in the right place?  Then I spotted him and watched his face light up as he realized that it was me, alone in this scary place, ready to see his show.  After a quick hug and hello, he introduced me to the other guys on that makeshift stage in the corner, Marty and Jeff.  Then the show began.

Song after song were covers I knew from some of my favorite bands. It was fun sitting there singing along.  In the middle of the set Marty and Jeff played a song while Vinnie and I stepped onto the dance floor for a tune,  then Vinnie stepped up to the mic for a solo song.  “This is how Debbie and I met,” Vinnie said, pointing to me, and began to sing Norwegian Wood by The Beatles (and for the record, that was NOT how we met.) As the set came to an end, the guys started playing something that sounded like Neil Diamond’s Cherry Cherry, which I love.  I grabbed the tambourine and started pounding out the beat, only to be taunted with the lyrics of John Mellencamp’s Rockin’ In The USA.  All I could do was keep playing, hiding my disdain for the song.  Fortunately, it has grown on me since that first night.

There have been countless shows since that night. I have met many new people and sung along to many songs and danced to some more.  I have become friends with Jeff and Marty and their family and friends.  I have watched the band grow to include Marty’s son Brian (whenever he is home) and my college friend Bryan.  When they play now, they often invite other musicians on stage to join them.  Every show is different and yet one thing remains the same:  the music is great and the shows are entertaining.  Check them out sometime.  You won’t be alone in a scary place because i will most definitely be there!