There’s no picture of me in my huntress costume from my high school musical, but if you want to know what I looked like, just think Wilma Flintstone’s dress in a green jungle print (and with bigger boobs, it was way before my surgery).  “Who Stole My Thunder?” was an original musical about Roman mythology penned by my tenth grade English teacher. I reconnected with the guy who played Neptune, God of the Sea, last night on Facebook and it got me thinking about it.

It’s been 40 years so the storyline is a little fuzzy but it was something about how someone steals someone else’s thunderbolt, the gods get angry, and wackiness ensues.

The story was told by Homer and took place partly on Mount Olympus. And of course there was a quest undertaken by Virocles, son of Ulysses. I couldn’t tell you where he went but there was a song that I can still remember the opening notes to called “Ho for the Wine Dark Sea”, unless Ho was their nickname for Juno, Queen of the gods. The cast was a mix of Roman gods and other gods that the playwright made up. They were actually pretty clever, mixing Bacchus and Mars and Venus and Diana with Badanova, the Brilliant and Calcula, the Computator. For all of those who think I am a prodigy because I remember so many crazy details, I broke into the memory boxes for the playbill. 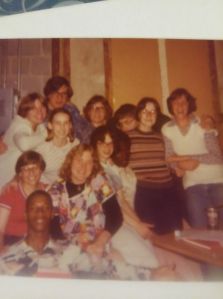 Besides being one of Diana’s huntresses, I was also in the chorus with some of my friends from St Lucy’s. We had rehearsals a few times a week and without big parts, there was a lot of goofing around in the auditorium with the other bit players. Hanging out behind the curtain or sitting in the seats halfway up the aisle of the auditorium laughing at the people on stage, it was fun night after night. Here’s a blurry pic of a bunch of us. Old friends and new friends and even the guy who gave me my first kiss!

I was just talking about this whole experience a few weeks ago, laughing about how I had done the huntress dance with a dress with no bra and one strap and big boobs, and my singing…all I can say is there’s a reason I only play the tambourine. Honestly, I was surprised that the play got off the ground at all, with our director sipping every night from a Nestea can filled with something that definitely did not smell like iced tea!! How she kept herself and all of us in line I cannot imagine. But opening night eventually arrived and there were no wardrobe malfunctions and there were standing ovations. It was the 70’s and I am pretty sure it was video taped, but I can only hope that the tape has disintegrated from age if it exists at all in the Fowler archives. The school doesn’t even exist anymore, having been repurposed and renamed the Public Safety and Leadership High School. Some of the kids tried out for thte musical the next year, Godspell, and although I didn’t get into the cast, I saw the show and they did a great job and I have a better Godspell story anyway, future blog post. I have a soft spot in my heart for high school musicals (and for Disney’s High School Musical,  the one they do in elementary schools where my 10 year old nephew played George and sang the National Anthem) and for the fun I had with my thespian friends.