Bonnie Raitt at the Ommegang Brewery?  I’m in!!   My friend Judy suggested that we go see Bonnie in concert and it was an easy sell.  I had loved Cooperstown ever since I lived in Oneonta many years ago.  And then of course I was all about checking out a new brewery, with this being my summer of beer and all.

It was a gorgeous drive down Route 28.  A burger and a beer (Brooklyn Summer Ale) sitting outside the Lakefront Hotel restaurant in Cooperstown was the perfect pre-concert dinner. Here’s the view from the deck of the Lakefront:

Judy and I then ventured out to Ommegang Brewery and after a loooong time in the car (there is only one county road into the brewery), we got a parking spot, grabbed our camp chairs, and ventured out to find a great seat.

The lush green hills surrounding the grounds made this concert venue just as gorgeous as our lakefront dinner.  We wandered through throngs of people to find a place to sit.  We had lots of time before the show and after a while, we started a conversation with the guy next to us, Ken.  We did the usual cocktail party thing, you know, questions like “What do you do?”  Judy is retired, I am in my 20th year at Barnes & Noble, and it turns out Ken is the Vice President of Sponsorship and Development at the Baseball Hall of Fame, so he won that round!

The line for food was really long, but there was no waiting for beer!  Tickets were purchased in one tent and beers poured in the next.  The servers were so colorful and fun, with lots of laughter and cheering.  When it was my turn I asked what I would have to do to get a cheer, and they responded with a big “Hooray!!”, just because!  We enjoyed the Ommegang Witte (similar in taste to one of my summer favorites, Blue Moon).  The most memorable quote from Judy came when I asked if she needed a refill and she replied, “I am not much of a beer drinker.”  Well, yes, folks, she really is.  You can check out the post, “99 Bottles of Beer on the Wall”, for more on that subject.

The warm up act, Richard Julian, was a good fit for Bonnie.  He played a great set, with some blues type songs that I enjoyed, especially one called, “Syndicated”. Then Bonnie came out.   During her show, she made a few references to the ‘cooking smoke’ that was wafting up onto the stage.  At one point, Ken remarked, “There seem to be a lot of people here with glaucoma.”  It was easily one of the best lines of the night!!

It was a very casual setting, with people wandering around and dancing.  Here is a view from our seats: 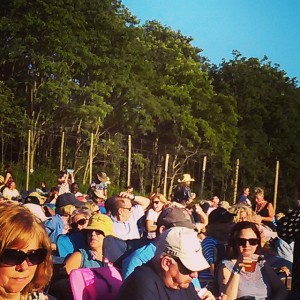 There was one very expressive woman in front of us dancing to each and every song, no matter the tempo or subject.  And boy, was she into it, telling everyone with the words and her moves just how she was feeling.  Just when we got used to her antics, she disappeared and was not seen again.  We speculated about what had happened to her, and Ken remarked, “You gotta know how to pace yourself.”

Why am I only quoting Ken, some guy we had never met before?  Because he made us laugh!! What a great companion for a perfect summer night!  He talked about the area and gave us recommendations for future trips to Cooperstown.  If you have a chance to get to Cooperstown and Ommegang, take it!!  It will be worth it!  As for the Hall of Fame, I will be going with my nephew next week and will tell you all about it another time!